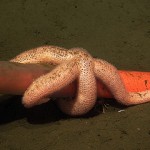 Your home Ethernet cable doesn’t deal with any of this ish—pictured here, a sea star and a squat lobster—behind some desk. NEPTUNE Canada The Juan de Fuca tectonic plate is by far one of the Earth’s smallest. It spans just a few hundred kilometers of the Oregon, Washington, and British Columbia coast. But what the Juan de Fuca lacks in size it makes up for in connectivity. It’s home to a unique, high-speed optical cabling that has snaked its way across the depths of the Pacific seafloor plate since late 2009. This link is called NEPTUNE—the North-East Pacific Time-Series Underwater Networked Experiment—and, at more than 800 kilometers (about 500 miles), it’s about the same length as 40,000 subway cars connected in a single, long train. A team of scientists, researchers, and engineers from the not-for-profit group Oceans Network Canada maintains the network, which cost CAD $111 million to install and $17 million each year to maintain. But know that this isn’t your typical undersea cable. For one, NEPTUNE doesn’t traverse the ocean’s expanse, but instead loops back to its starting point at shore. And though NEPTUNE is designed to facilitate the flow of information through the ocean, it also collects information about the ocean, ocean life, and the ocean floor. Read 52 remaining paragraphs | Comments