Enlarge / Indian visitors walk through the courtyard of Jama Masjid amid heavy smog in the old quarters of New Delhi on November 8, 2017. SAJJAD HUSSAIN/ AFP/ Getty Images) With calm winds, seasonal crop burns, and the usual vehicle and industrial emissions, an extremely thick, toxic fog of pollution has settled on Delhi, choking and sickening residents. Pollution measurements and indexes have exceeded charted ranges, blowing past the highest categorized levels dubbed “severe” and hazardous to health. In some areas of the gigantic metropolitan area, measurements of certain pollutants were around 30 times the levels considered safe by the World Health Organization. Local journalists reported that the smog is causing throat irritation, wheezing, nausea, vomiting, and extreme fatigue. Delhi’s chief minister, Arvind Kejriwal, took to Twitter to call the city a “ gas chamber .” Read 8 remaining paragraphs | Comments 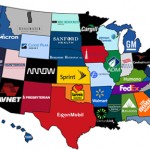 What the biggest companies are from each state in the US