It’s no doubt been a long day for Eric “Wingman” Peterson and the other folks at Descendent Studios , but their crowdfunded reboot of the six-degrees-of-freedom shooter Descent is now over the $600,000 mark and will receive its funding, which will allow Peterson and team to buckle down and get to work on the title—once the post-Kickstarter partying is over, of course. Though the funding campaign got off to a good start, pledges slowed over the last week of the campaign. However, backers donated more than $200,000 of the $600,000 goal in the past four days, with $70,000 of donations coming in today, on the campaign’s final day. With about two hours left on the clock, the donation mark stands at just a bit over $602,000. Descent Underground engine demo running on an Oculus Rift DK2. Our stomachs lurch in anticipation! Peterson and his team (which includes several former members of the Austin branch of Cloud Imperium, which is currently focusing on building Star Citizen’s persistent universe) have set their sights on resurrecting the Decent series of games, which reached the height of their popularity in the late 1990s and cast players as the pilot of a fast, maneuverable spaceship blasting killer robots in underground mines. The game’s hook was that unlike other FPS titles, Descent allowed full movement along all axes—you could move up, down, left right, forward, backward, and rotate in any direction. Read 3 remaining paragraphs | Comments 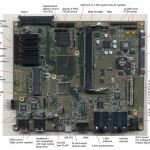 Bunnie Huang is building a laptop