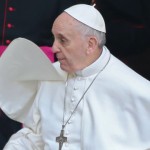 The answer is actually yes. And in fact, the Roman Catholic Church has recognized Darwinian evolution for the past 60 years. It openly rejects Intelligent Design and Young Earth Creationism saying that it ” pretends to be science .” But the Church’s unique take on the theory, what it calls theistic evolution , still shows that Catholics have largely missed the point. Back in 1950, Pope Pius XII laid out his papal encyclical, “Humani Generis,” in which the Church’s official position on natural selection was laid out. The statement said that there’s no intrinsic conflict between Christianity and evolution . The theory, as articulated by Charles Darwin in On the Origin of Species , has withstood scientific scrutiny since its publication in 1859 — and the Church does not dispute this. But — and this is a big but — Catholics can believe in evolution just as long as God’s involvement is acknowledged . Just what this involvement actually entails has never been made entirely clear, but the Church is adamant on one point: The human soul is a creation of God and not the product of material forces. On this point, the Church will never waiver. Catholics believe that humans are descended from apes, but that we all share a common male ancestor, Adam. He’s the lucky guy who got to hand down Original Sin to all his descendants. This means that Catholics don’t believe in polygenism , the idea that humans are descended from a group of early humans. Interestingly, all humans may be descended from a common female ancestor , the so-called Mitochondrial Eve . But that’s science, not Biblical conjecture. At the same time, Catholics take no issue with the Big Bang theory, along with cosmological, geological, and biological axioms touted by science. The Church rejects the notion that humans can find traces of God’s work or his intention by looking for “design signatures” (i.e. specified complexity) in the world around us — a central contention of the ID crowd. God, says former Vatican astronomer Rev. George Coyne, is “not continually intervening, but rather allows, participates, loves.” The previous Pope, Benedict XVI, saw the conflict between creationism and evolution as absurd. He wrote : Currently, I see in Germany, but also in the United States, a somewhat fierce debate raging between so-called “creationism” and evolutionism, presented as though they were mutually exclusive alternatives: those who believe in the Creator would not be able to conceive of evolution, and those who instead support evolution would have to exclude God. This antithesis is absurd because, on the one hand, there are so many scientific proofs in favour of evolution which appears to be a reality we can see and which enriches our knowledge of life and being as such. But on the other, the doctrine of evolution does not answer every query, especially the great philosophical question: where does everything come from? And how did everything start which ultimately led to man? I believe this is of the utmost importance. But it’s here where the Church falls flat. This is the classic argument made by all reconciliationists — the idea that religion and Darwinian natural selection can work in harmony together. It’s a “want my cake and eat it too” proposition that largely ignores the potency of Darwin’s dangerous idea as a God killer. Darwin’s theory provides for a stand alone system. Evolution is fully autonomous process that does not require any guiding “rationality” (Benedict’s term) to function. It’s an agonizingly slow, brutish, and insanely methodical process, but it works. Moreover, it has given rise to the concept of scientific naturalism — the idea that the material world and all the phenomena we see around us can be explained without having to invoke an architect or overseer. All the evidence currently points to this conclusion, and until science reveals any hint of supernatural meddling — which it has not – we will continue to have to accept naturalism as the ongoing scientific paradigm. As for the new Pope, Francis I, his position will have to follow those of his predecessors in keeping with the principle of papal infallibility. But like Pius and Benedict, he can elaborate on the Church’s position when he feels it necessary.

See the original article here:
Does the new Pope believe in evolution?