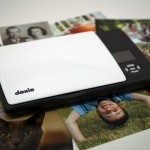 When it comes to portable scanners , Doxie already has a little something for most everyone . But there’s nothing wrong with adding yet another one to its lineup, right? Today, the company is announcing the Doxie Flip, a wireless scanning device that bears a flatbed appearance and remains as easily transportable as the other members of the family. Unlike Doxie’s Go and One , however, the Flip isn’t designed to capture documents — instead, the idea is to be able to scan artifacts of many different shapes and sizes, such as notebooks, photo albums, coins and other stuff your creative mind might think of. On the software side, Doxie is making folks who are invested in its ecosystem feel right at home, since the newly released Flip relies on the same software as previous models. The Doxie Flip is now available for $149, and you can get a better glimpse of it by checking out the gallery below.%Gallery-slideshow103457% Filed under: Misc , Peripherals Comments Source: Doxie

Marshall Develops Smartphone Designed Like One of Their Amps