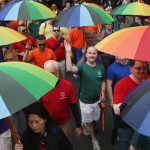 A bungling pilot has just reminded us ( again ) why drones need at least some kind of regulation . During Seattle’s gay pride parade, a 25-year-old woman was knocked unconscious after she was struck by a UAV, according to the SPD Blotter . The genius operator reportedly crashed the DJI-sized craft into a building, causing it to fall on her head. She was treated by firefighters at the scene, while one of her friends handed the drone and photographs of the alleged pilot to police. Officers are trying to contact other witnesses who may have the seen the man — reportedly a white male in his 20s with a baseball cap, sunglasses, cut off shorts and a “noticeable tattoo of a woman.” Meanwhile (and we really shouldn’t need to say this) please don’t operate a drone in proximity to crowds unless you have permission and really know what you’re doing. [Image credit: Getty Images] Filed under: Robots Comments Source: SPD Blotter