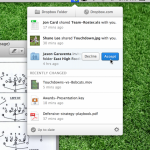 Dropbox for Mac received an update to version 2.0 on Tuesday, bringing with it a number of UI upgrades to the desktop. The most noticeable difference is the revamped and prettified drop-down interface, which now allows you to accept or decline sharing requests right from the menu instead of requiring a trip to the website. The new drop-down interface also displays a list of recently updated files from across your Dropbox-enabled devices, and it gives easy access to both sync settings and the Dropbox website. This is a small but significant change to the way the menu item previously functioned. In the past, there was not much functionality there, but now it’s a place where the user might actually go in order to see which files are being synced. Additionally, the new menu interface makes for much easier file or folder sharing. Select the item in the menu that you want to share and a “Share” button pops up on the right. Clicking it still takes you to the Dropbox website in order to invite other users, but it’s a start in making the desktop software a little more usable. Read 1 remaining paragraphs | Comments