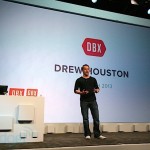 At Dropbox’s first DBX developer conference in San Francisco, CEO Drew Houston announced a new Dropbox Platform for developers, which is essentially a suite of tools to make it easier for apps to access data across devices and operating systems. Built on top of the Sync API, Houston says the new Dropbox Platform is designed to “replace the hard drive” and that “sync is the new save.” The platform is comprised of “Drop-ins, ” which provide cross-platform UI components, “Chooser, ” which gives apps instant access to files in Dropbox, and “Saver, ” which provides one-click saving to the cloud. Dropbox also announced the Datastore API, which lets you sync data like contacts, to-do items and game state — so you can save your Angry Birds level across your different gadgets for example. Some of the third-party companies that have signed onto the new Dropbox Platform include Shutterstock, PicMonkey, Asana, Yahoo! Mail, Animoto, 1Password, CloudOn, FedEx and Fargo. As part of the announcement, Dropbox also announced a Developing… Comments