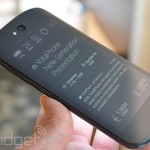 If you caught our review of the YotaPhone at the end of last year, you’ll know we were cautious about recommending it — in fact, we said it was probably safer to hold out for a second-gen device. Well, here’s a surprise: that replacement is already at the prototype stage and it brings some big improvements that could undo many of the criticisms we leveled at the original. Most importantly, the rear E-Ink panel is now fully touch sensitive, which means you’ll be able to a lot more with this phone without ever needing to engage the traditional, power-hungry display on the other side. Calls, texts, emails, browsing, tweeting and more can be handled using the “always-on” 4.7-inch E-Ink display, with the only sacrifice being predictably slower refresh rates. Although we’ve been hands-on with a very early and fragile prototype, the physical improvements are immediately obvious. When you turn the phone over to its “normal” side, for example to watch video or use the camera, you’ll notice that the 720p LCD panel has been upgraded to a slightly bigger 5-inch, 1080p, AMOLED one. Android performance will also benefit from the inclusion of a 2.3GHz Snapdragon 800 instead of the old Snapdragon 600, and overall thickness has been reduced to 8.9mm (0.35 inches). Assuming that the price doesn’t soar much higher than the original’s 499 ($675), these are all very welcome changes. Unfortunately, it sounds like you still won’t be able to run the whole of Android (and all Android apps) on the E Ink side, despite the addition of full touch sensitivity. That’s a shame, because there are literally thousands of mainstream apps that could be put to good use in low-power mode (not least major e-book readers and music streamers). However, Yota Devices has a plan: It’s making its SDK open to everybody today, which should make it easier for developers to tweak their code to support the rear panel, and it says it’s still in talks with Google, Amazon and Barnes & Noble to make all those apps compatible. So, who knows? If they can get some of this support in place by the time this next-gen YotaPhone launches later in the year, we could be looking a drastically superior product. Filed under: Cellphones , Mobile Comments

More:
Dual-screen YotaPhone has a second shot at greatness 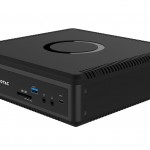