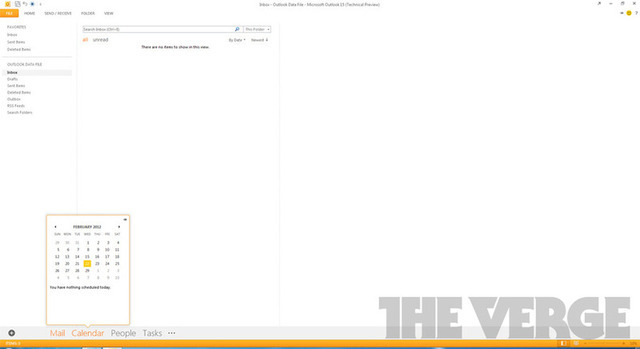 The Verge has some screenshots of Office 15’s interface taken from the Technical Preview released in January. Though Microsoft is extending the Metro styling to many of its products, Office 15 will still use the ribbon interface first introduced in Office 2007. But that ribbon interface has been given a Metro twist.

The Office 15 applications have an interface that has been substantially pared down. The ribbon itself will now default to being collapsed, and the gradients, panels, and dividing lines that are a major feature of the current Office interface have for the most part been removed.

Getting rid of this clutter is a major feature of the Metro aesthetic. So too is the greater dependence on typography and words, rather than icons; as another nod to Metro ideals, the ribbon’s tabs now use upper-case type, and instead of using icons to switch between mail, contacts (renamed “people” in Office 15, aligning it with the terminology used in Windows Phone and Windows 8), calendars, and tasks, Outlook 15 will use Metroesque words.

Overall, the visual refresh shows how Metro’s ideas can still feature in complex, feature-rich applications. The interface will be familiar to existing Office users, but the new look means that Office 15 will feel comfortable on Metro systems—including the ARM tablets that will come with some Office applications.