eBay and PayPal remained tight even after the two headed to splitsville in 2015. That’s bound to change in the near future now that the auction site has decided to offer an integrated payment system built by Amsterdam-based company Adyen. The move will give way to a more seamless payment experience — no need to log into another website to pay — since Adyen’s product (already used by Netflix and Uber) is purely a back-end payment service. You might encounter the new payment system as soon as the second half of 2018, when the e-commerce giant deploys it (on a small scale) in North America. Its availability will expand in 2019 and the year after, until all sellers have been transitioned to the new system by 2021. eBay has an existing contract to continue offering PayPal as a payment option until July 2023, but neither company has announced if they have plans to extend that partnership beyond that point. According to the auction site’s announcement, offering its own intermediate payment system will allow it to build a central console where sellers can track all their transactions easily. Plus, it’ll lower the payment processing charges sellers have to pay. Even with the lower charges, Recode says the move will boost eBay’s revenue by $2 billion, since it can now pocket those payment processing fees. At the moment, PayPal’s value is billions more than eBay — its shares fell after news of eBay’s decision was announced, but it remains to be seen if it will have a huge and permanent effect on the payment portal’s business. Wenig: We have made the decision to intermediate payments on $eBay . We have already begun building this capability, and will move as quickly as we can under the terms of our operating agreement with PayPal. pic.twitter.com/qDp3mDmBVx — eBay Newsroom (@eBayNewsroom) January 31, 2018 Via: Recode Source: eBay , (Twitter) 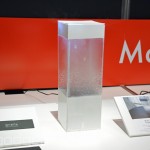 The Tempescope shows you tomorrow’s weather by physically creating it

Inside the Blood Factory That Keeps Track of the World’s Rare...