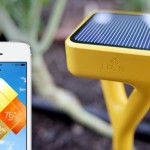 The Internet of Things is coming to a garden near you. Last fall, a company called Soil IQ made the finals at TechCrunch Disrupt with a soil monitor that continuously sends data on moisture and temperature back to the cloud. It was co-founded by a Princeton grad and soil scientist named Jason Aramburu, who had worked with hundreds of Kenyan farmers to increase crop yields. He then teamed up… Read More

See original article:
Edyn Is A Gardening Monitor That Sends Moisture, Temperature Data Back To The Cloud