dcblogs writes The number of people working as electrical engineers declined by 29, 000 last year, continuing a long-standing trend, according to government data. But the number of software developers, the largest IT occupational category, increased by nearly 12%, or a gain of 132, 000 jobs. There were 1.235 million people working as software developers last year, and 271, 000 electrical engineers, according U.S. Bureau of Labor Statistics data. Read more of this story at Slashdot.

America Enters Its Darkest Days, as SkyMall Lands in Bankruptcy 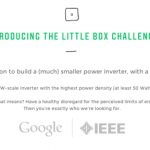