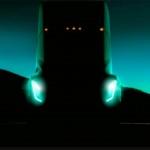 Elon Musk made a few revelations about some his newer projects this week, including the electric semi-truck Tesla has been working on since 2016. The automaker promised to unveil the big rig this September, but the Tesla-slash-SpaceX chief has given us a shadowy first look during his TED talk on April 28th. Based on what little we can see in the image above, it looks smoother than your average truck, with headlights and general design that seem to take cues from the company’s cars. Musk described the vehicle as a “spry truck” that you can drive around like a sports car — he said he’d already taken it for a spin himself. You can judge for yourself when Tesla reveals it in its full glory this fall. Other than Tesla’s big rig, Musk also showed off what The Boring Company’s digging machine looks like earlier this week. His new company released a concept video showing how an underground tunnel network can help commuters get to their destinations much faster than before. Elon Musk teased semi-truck at TED talk. pic.twitter.com/sY0w7KSsTx — Johana Bhuiyan (@JMBooyah) April 28, 2017 Source: AutoBlog , TechCrunch

This Is the World’s Most Efficient Black Silicon Solar Cell