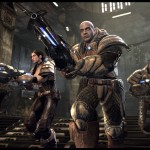 It’s been a long six-and-a-half years since we’ve gotten a new Unreal Tournament game (not counting expansion packs), but today marks the beginning of the end for that wait. Epic announced  that work on a new game, simply titled Unreal Tournament , begins today for PC, Mac, and Linux, and the process will heavily involve participation from the modding and player community from the get go. While a “small team of UT veterans” at Epic will be spearheading the development of the game, everything from design decisions to art direction will primarily “happen in the open, as a collaboration between Epic, UT fans, and [Unreal Engine 4] developers,” Epic says. The developers are inviting everyone from regular players to experienced modders from sites like Polycount to sign up at the Unreal Engine forums and use an official wiki to take direct part in driving the game’s direction. Already, mere minutes after the announcement, those forums are filled with players discussing everything from series maps and weapons they’d like to see return to things like VR headset compatibility. Epic says it will be “many months” until the game is in any sort of playable state, but when it is playable it “will be free. Not free to play, just free.” Source code will be made available directly from GitHub as it is updated, and modders will even be able to fork their own builds if they want to take the project in a new direction. Read 2 remaining paragraphs | Comments