Facebook is reportedly acquiring location sharing service Gowalla and bringing “most” of its employees and founder Josh Williams over to Palo Alto headquarters to work on Timeline, according to CNN. We could not get confirmation from Facebook, Gowalla or several investors in the company at this time. Facebook spokesperson Jonathan Thaw said the company doesn’t comment on rumors or speculation.

The Austin-based company launched as a location-sharing service back in 2009 but never got the same sort of traction that New York-based rival Foursquare saw. Today, we can see that the Gowalla app has 10,000 daily active users connected to Facebook against Foursquare’s 560,000 daily actives. Facebook also has its location product Places, which it changed a few months ago to scrap the check-in feed from its mobile platform. Instead, Facebook users must add a city location or tag a specific Place in their Wall or Timeline posts.

Gowalla pivoted earlier this year too, changing its check in-centric app to one that is like a crowdsourced local and travel guide.

Given the amount of money the company raised, Facebook would have had to pay somewhere around $30 million or so for investors to have made their money back. In 2009, TechCrunch’s Michael Arrington reported that the company’s post-money valuation was $28.4 million at the time of the second venture round. Given Gowalla’s lack of traction plus how aggressively Facebook’s valuation is priced in within private secondary markets, it’s unclear whether this deal would make investors whole.

If this was a pure talent acquisition, we would expect to see Facebook shutdown the standalone Gowalla app too. 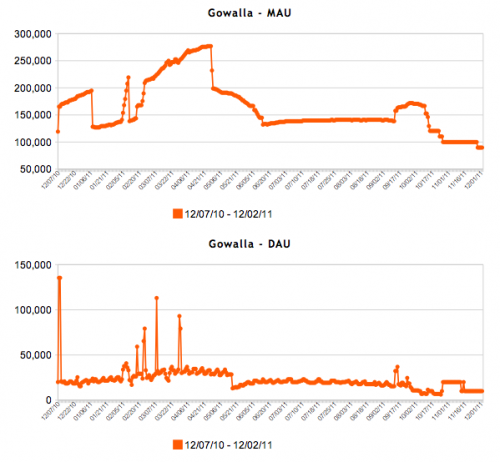