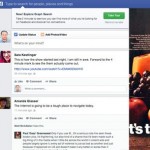 According to Ad Age’s unnamed sources, Facebook is preparing to launch a somewhat invasive ad program this summer through its news feed. Alongside the left and right spaces outside of the news feed, the company is reportedly planning four 15-second autoplay video ads that’ll target women over 30, women under 30, men over 30, and men under 30 (so, uh, expect lots of super general advertisers we’d guess — toilet paper and Coca-Cola, for example). While potentially invasive, the ads are also potentially extremely lucrative; Facebook is apparently seeking near $1 million per day, per advertiser. That’s a cool $4 million (roughly) per day , with the potential risk of pushing away the billions of people enabling such an incredibly high ad rate. Facebook’s had a strange history with advertising, occasionally amending rules that angered the social network’s users (such as targeting marketing based on browsing history). The California-based internet company also outright paused its mobile ad network program last December, citing internal prioritization of other products. As you might’ve guessed, Facebook reps declined to comment on this report, so it’s probably best to reserve your outrage until there’s some solid confirmation. Filed under: Software , Facebook Comments Source: Ad Age