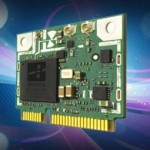 Wilocity’s wireless chips allow 4.6Gbps transmission over the 60GHz band. Wilocity In a quiet suite removed from the insanity of the Consumer Electronics Show expo floor, a company aiming to build the fastest Wi-Fi chips in the world demonstrated its vision of wireless technology’s future. On one desk, a laptop powered a two-monitor setup without any wires. At another, a tablet playing an accelerometer-based racing game mirrors its screen in high definition to another monitor. Across the room, a computer quickly transfers a 3GB file from a wireless router with built-in storage. The suite was set up in the Las Vegas Hotel by Wilocity , a chip company specializing in wireless products using 60GHz transmissions, which are far faster than traditional Wi-Fi. Avoiding the show floor is a good idea if you’re worried about Internet connectivity, because thousands of vendors are clogging the pipes. But that’s not why Wilocity was here—they’d be able to perform the demo even in the busiest parts of CES without interference because they’re not relying on the congested bands used by regular Wi-Fi. Read 24 remaining paragraphs | Comments

Read the original post:
Fastest Wi-Fi ever is almost ready for real-world use