Jason Alley The Federal Communications Commission last week said it will add 195MHz of spectrum to Wi-Fi’s 5GHz band. This move is designed to relieve congestion in Wi-Fi networks, particularly in areas of widespread simultaneous usage like airports and sports stadiums . It could help your home network too, but not right away—routers available in stores today may not be able to use the new spectrum at all . Finding out definitively whether today’s routers will support the new spectrum is difficult, partly because the FCC still has to issue specific rules governing its use. We’ve hit up router vendors and other industry people to find out whether software updates might let current routers access the new spectrum. While the results were a bit muddled, it seems safe to say no one is guaranteeing today’s routers will get the benefit of the new 195MHz. Even the latest routers supporting the ultra-modern 802.11ac standard may be left behind. Cisco refused to comment at all, telling us only “Cisco has not made any announcements about this so cannot discuss at this time.” Buffalo told us “the chip vendors will need to work on it” and that “they will at least to have to make changes to the hardware driver. … The magnitude of that change will determine if Buffalo is able to use the same hardware.” Read 21 remaining paragraphs | Comments

Continue reading here:
FCC adds spectrum to Wi-Fi—but you likely need a new router to use it 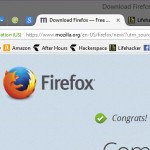 Firefox Gets a Brand New, Even More Customizable Design