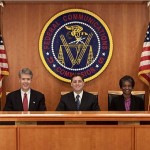 Cast your memory back to last summer. Sweep away memories of iPhone 5 leaks galore , and you might remember that the US Government Accountability Office (GAO) asked the FCC to reevaluate its radiation limits for mobile phones. Now a few seasons later, the FCC has finally wrapped up a report that responds to the GAO, and there are no changes to its RF radiation levels in sight because it feels comfortable with its current caps. “We continue to have confidence in the current exposure limits, and note that more recent international standards have a similar basis,” reads the report. However, given that its guidelines were adopted in 1996, new research on radiation and the proliferation of mobile devices , the FCC would like some feedback regarding its restrictions. It’s put out a call for comments from concerned parties and even federal health and safety bodies. Though the freshly-released document didn’t rock the proverbial boat, it made one change worth noting. The pinna (outer ear) is now classified an extremity, which means the FCC allows devices to hit the tissue with more radiation. Feel like poring through 201 pages of regulatory minutiae? Click the source link below for the commission’s full dossier. Filed under: Cellphones Comments Via: The Verge Source: FCC