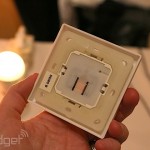 It’s not very often that a light switch really catches Engadget’s eye, so you know it has to be something clever to show up on our virtual pages. This particular lightbulb activation device (as demonstrated by NXP ) is not only wireless, it’s powerless — we were able to turn on a wireless lightbulb simply by tapping on the switch itself, without requiring an external power source. This one single action alone actually generates just barely enough power to push a signal to the bulb. The unit we played with also utilizes NFC to pair wirelessly with a light source. All told, it worked without a hitch, and the tech is currently being sampled out to manufacturers. This means we’ll likely start seeing devices take advantage of this setup sometime this year, so be on the lookout for more details as they come out. Comments