An anonymous reader writes “Mozilla today officially launched Firefox 23 for Windows, Mac, Linux, and Android. Improvements include the addition of a share button, mixed content blocker, and network monitor on the desktop side (release notes). The new desktop version was available on the organization’s FTP servers last night, but that was just the initial release of the installers. Firefox 23 has now officially been released over on Firefox.com and all existing users should be able to upgrade to it automatically. As always, the Android version is trickling out slowly on Google Play.” Read more of this story at Slashdot. 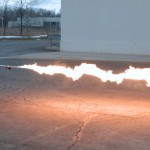 This personal flamethrower is somehow legal in 49 states