We noted Firefox 3’s spectacular eight million downloads in a day when discussing the recent launch of IE9 , and that mark shall live on as a record for another day. Firefox 4 looks to have a had a thoroughly successful debut, going past the five million milestone within the first 24 hours of its release, but it hasn’t quite been able to overshadow its predecessor. 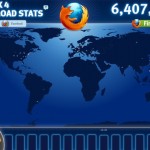