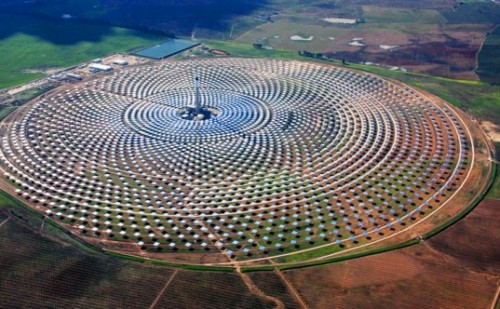 One of the difficulties with using solar energy is its inability to produce electricity around the clock. Torresol Energy in southern Spain has solved this problem by storing thermal energy in two tanks of molten salt. This enables the plant to generate electricity long after sundown in order to satisfy the energy needs of the local populace. The molten salt — known as MSES — stores enough thermal energy during the day to create steam power during the night.

The MSES consists of 60% potassium nitrate and 40% sodium nitrate. This mixture has the amazing ability to retain 99% of the heat energy generated by the CSP plant to be reused later. Essentially what Forbes calls a “battery” that lasts for about 15 hours – more than double Andasol I’s 7 hour capacity – the MSES is not considered especially toxic to the environment.

Gemasolar is expected to produce approximately 110,000 MWh of energy each year – enough to power 25,000 homes. Although a 19.9 MW plant is relatively small, this functions on par with a 50MW plant that