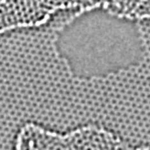 An image of graphene, showing defects in its single-atom thickness. UC Berkeley Hydroelectricity is one of the oldest techniques for generating electrical power, with over 150 countries using it as a source for renewable energy. Hydroelectric generators only work efficiently at large scales, though—scales large enough to interrupt river flow and possibly harm local ecosystems. And getting this sort of generation down to where it can power small devices isn’t realistic. In recent years, scientists have investigated generating electrical power using nano-structures. In particular, they have looked at generating electricity when ionic fluids—a liquid with charged ions in it—are pushed through a system with a pressure gradient. However, the ability to harvest the generated electricity has been limited because it requires a pressure gradient to drive ionic fluid through a small tube. But scientists have now found that dragging small droplets of salt water on strips of graphene generates electricity without the need for pressure gradients. In their study, published in Nature Nanotechnology , researchers from China grew a layer of graphene and placed a droplet of salt water on it. They then dragged the droplet across the graphene layer at different velocities and found that the process generated a small voltage difference. Read 6 remaining paragraphs | Comments 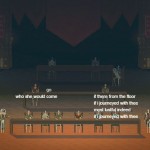