Zothecula writes No one with red blood in their veins buys a sports car and hands the keys to a chauffeur, so one of the barriers to truly personal submarining has long been the need for a trained pilot, not to mention the massive logistics involved in transporting, garaging and launching the underwater craft … until now. Pioneering underwater aviation company DeepFlight is set to show an entirely new type of personal submarine at the 2014 Monaco Yacht Show next week, launching the personal submarine era with a submersible that’s reportedly so easy to pilot that it’s likely to create a new niche in the tourism and rental market. Read more of this story at Slashdot.

Link:
For $1.5M, DeepFlight Dragon Is an "Aircraft for the Water" 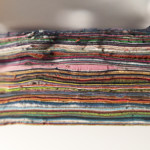 30 years of graffiti layers taken from a wall in The...