Hugh Pickens DOT Com writes “USA Today reports that Ford’s next F-150 pickup truck will be made mostly of aluminum, instead of steel, in a bid to save weight. It will likely either be hailed as a breakthrough product to buyers who’ve made F-150 the bedrock of its business or one that draws comparisons to a ‘rolling beer can.’ The automaker has asked Alcoa, which makes aluminum blast shields for battlefield-bound vehicles, to lend some of its military-grade metal for the automaker’s display, according to people familiar with Ford’s plans. Ford’s sales job will be considerable: The company is eager to demonstrate the toughness of aluminum, which is lighter than steel, to pickup buyers at next month’s Detroit auto show. ‘This is already the most significant debut at the auto show, ‘ says Joe Langley. ‘Everybody’s going to be dissecting that thing for a long time, especially since Ford will be taking such a big gamble.’ As a transformative product with a potentially troublesome introduction, the new F-150 has drawn comparisons with Boeing Co.’s 787 Dreamliner — an aircraft developed under the company’s commercial airplane chief at the time, Alan Mulally, who in 2006 became Ford’s chief executive officer. Because of the complicated switch to aluminum from steel in the F-150’s body, IHS Automotive estimates Ford will need to take about six weeks of downtime at each of its two U.S. truck plants to retool and swap out robots and machinery. Ford is apparently trying to squeeze more than 700 pounds out of its next generation of pickup trucks. Using aluminum to cut weight would help meet rising fuel economy standards in the United States, which is requiring a fleetwide average of 54.5 miles per gallon by 2025.” Read more of this story at Slashdot. 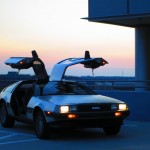