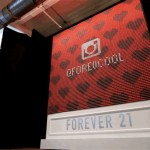 Most companies seek out the latest displays for high-tech billboards, but Forever 21 has decided to take a different route for this particular Instagram project. For the past year-and-a-half, the folks at connected hardware maker Breakfast New York have been building a “Thread Screen” for the company. It’s called that, because well, it’s literally a screen made of 6, 400 mechanical spools of multicolored threaded fabric. Those spools have five-and-a-half feet of fabric each, divided into 36 colors that transition every inch-and-a-half. They move like a conveyor belt, stopping at the right hue based on what picture they’re displaying — an infrared even scans the finished product to make sure each spool is displaying the correct color. According to Breakfast NY, which also created a smart street sign among other installations in the past, the machine weighs 2, 000 pounds and has over 200, 000 components. It’s a gargantuan display, and you’ll get the chance to control it from today, July 22nd, up until July 28th. When you post a photo on Instagram and use #F21ThreadScreen as a hashtag, the device’s accompanying software will take your image and optimize it for the screen’s 80×80 resolution. You’ll then get an edited video of your picture as the Thread Screen transformed to display it — check out this editor’s profile photo being ran through the system below to see an example of what you’re getting. If you’re curious about other people’s photos, though, you can also visit the project’s official website . F21 and Breakfast are live streaming the machine as it displays photo after photo for 24 hours from now until the project ends. Filed under: Misc Comments Source: Breakfast New York , F21 Thread Screen