The folks down at the Federal Trade Commission are busy helping all of us these days, whether they’re weighing in on patent disputes or forcing firms to help cover your child’s lack of parental supervision . Today, the FTC charged several companies and individuals with participation in an elaborate shell game from 2010 that was really just a $275 million dollar credit card scam. According to a separate, ongoing lawsuit filed by the Commission, a company called I Works did the stealing, but wouldn’t have been able to take $26 million of the total without the aid of the defendants in this new lawsuit. The unfortunates in question are alleged to have served as the conduit through which all that stolen cash flowed. By providing I Works access to payment networks and multiple accounts, the scheme kept the volume of traffic through those accounts low enough to stay off Visa and MasterCard’s credit monitoring radar. So, while they didn’t actually steal money, they provided the means to do so, and were paid from the illegal proceeds. Several of the accused have already settled up with the FTC, which resulted in a $1 million judgment against them. The remaining defendants face a much stiffer penalty should they lose in court, as the Commission seeks all of the $26 million they helped steal, plus legal fees. Should you be among the victims, I wouldn’t hold your breath waiting for restitution — the folks who settled were only able to pay $328, 607.78, so the rest of the judgment has been suspended. Still, we salute the effort, Uncle Sam. May this serve as a reminder for all of us to be careful with the plastic until technology delivers us a more secure way to pay. Credit card theft takes many forms . Filed under: Misc Comments Via: Federal Trade Commission Source: FTC legal complaint (PDF) 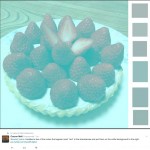 The strawberries in this photo are blue