An anonymous Slashdot reader writes: “A fugitive in Florida has been arrested by police after he used a wanted poster adorned with his mug shot for his Facebook profile picture, ” writes the International Business Times. After investigating reports of a disturbance, police discovered the 41-year-old’s Facebook profile, which revealed the man was already wanted for six months for violating his parole after two counts of battery. “Police say that as they arrested Yearwood a bag of marijuana fell out of his pocket. They charged him with possession of cannabis under 20 grams and are continuing to investigate the battery complaint.” One Twitter user jokingly suggested that the suspect should also be charged with copyright infringement — for using the police department’s photo without their permission. Read more of this story at Slashdot. 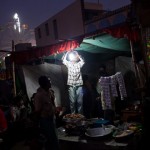 Your old laptop’s battery will light homes in developing countries