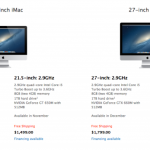 Apple’s newer, thinner iMacs are due to be released  tomorrow , with the 21-inch models showing up in stores and shipping immediately, and 27-inch models shipping some time in December. While base model pricing and configuration options have been  known  ever since the new models were announced in October, Apple has not yet officially announced the pricing of any of the add-on options like video cards and extra storage, so potential purchasers haven’t yet been able to nail down their total pocketbook impact. Enlarge / Base pricing for the new iMacs. Image from store.apple.com However, earlier this week MacRumors  posted  news from an Apple reseller named  Expercom , which reportedly contains the entire set of iMac build-to-order upgrade prices. According to that list, a fully loaded 27-inch iMac will cost an eye-watering $4,249, before tax: Base price, 27-inch iMac, 3.2GHz quad-core Intel Core i5, NVIDIA GeForce GTX 675MX video card, 1TB HDD, 8GB RAM:  $1,999 Upgrade to 3.5GHz Intel Core i7:  $200 Upgrade to NVIDIA GeForce GTX 680MX video card:  $150 Upgrade to 768GB SSD:  $1,300 Upgrade to 32GB of RAM:  $600 Tossing in 6 percent for a guess at sales tax (obviously, this varies by state and even city) yields a grand total of  $4,503.94  for an iMac with every single upgrade box checked. Hope you brought a second pair of underwear… preferably one stuffed with $100 bills. Read 5 remaining paragraphs | Comments 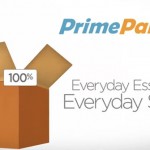 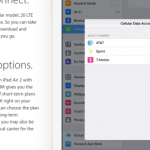 Apple Built A SIM Card That Lets You Switch Between AT&T,...