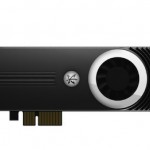 We have a feeling graphics artists are going to be begging their studios for Fusion-io ‘s latest ioFX super-SSD. After receiving critical acclaim for its 460GB version , the company has today introduced a massively-speced 1.6TB variant at NAB. Despite the space increase, the new unit is not bigger than its older sibling. In related news, HP has also signed on to integrate ioFX into its HP Z 420, 620 and 820 all-in-ones, and it’ll also give current workstation owners the option to simply add the card to their existing machines. Fusion won’t be releasing any details about pricing for the 1.6TB ioFX just yet — that’ll remain under wraps until its released this summer. For now, movie makers can net the 460GB one for $2K (about $500 less that its release price). Full press release after the break. Filed under: Desktops , Misc , Storage Comments

Google Rolling Out a New Web UI for Google Drive