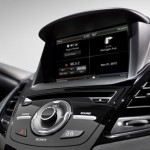 While Ford’s MyFord Touch is a popular option for tech-savvy drivers, it’s not always the most intuitive — some complain that basic tasks, like radio tuning, are relatively awkward. The company is very aware of the feedback, as it’s now supplementing the touch controls with “traditional” buttons and knobs. Both the latest F-150 and future vehicles will reflect the hybrid approach. Ford is still giving touchscreens some love with a MyFord Touch update due this summer, but it’s clear that the company will keep one foot in the analog world for a while longer. Filed under: Transportation Comments Via: SlashGear Source: Ford