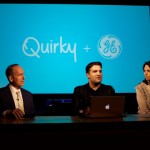 Today, at an event in New York, GE announced that it will open up “thousands” of patents from its library of some 20,000 to inventors using Quirky’s crowdsourced product development platform. That means that if you’re bright enough, you can use a GE patent to invent something. GE will still collect royalties on your brain power, but they promise not to sue you. More »

Read More:
GE Is Freeing Up ‘Thousands’ Patents to Fuel Your Imagination