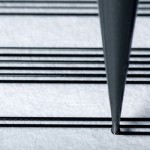 Embedded tech can fit into some incredible spaces , but it can’t yet fit everywhere; there are places that are simply too harsh or small for modern technology. If GE gets its way, though, just about any surface will be fair game. Its Direct Write technology uses ink made from either metals or metal oxides to print tiny, flexible sensors that both fit into tight spots and survive conditions that typically fry electronics. You could see sensors inside the hot environment of a jet engine, or put both pressure and temperature sensors into areas that normally don’t have room for anything. GE is already testing Direct Write sensors with some of its partners, and it notes that the technique could apply sensors to devices well after they’ve left the factory. However, the technology isn’t flawless; while the ink may survive hostile environments, wireless signals typically don’t. It may be a long while before you can fit sensors in places where even wires are too risky. Filed under: Misc Comments Via: Wall Street Journal Source: GE Reports

Fewer People Are Dying of Cancer Than Ever Before

Outlook Gets a Redesign, Adds In Tons of Third-Party Integration