mdsolar writes: The capacity of wind power generation worldwide reached 432.42 gigawatts (GW) at the end of 2015, up 17 percent from a year earlier and surpassing nuclear energy for the first time, according to data released by global industry bodies. The generation capacity of wind farms newly built in 2015 was a record 63.01 GW, corresponding to about 60 nuclear reactors, according to the Global Wind Energy Council based in Brussels. The global nuclear power generation capacity was 382.55 GW as of Jan. 1, 2016, the London-based World Nuclear Association said. Read more of this story at Slashdot. 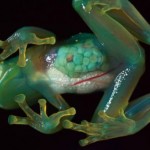 Who Needs to Dissect Frogs When You Can See Right Through...

US government names North Korea as the source of WannaCry