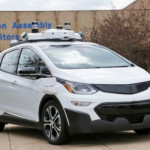 GM has already said it has what it takes to get a fleet of autonomous vehicles on the road before anyone else, and that timeline might’ve sped up further. Cruise Automation , the company GM acquired a little over a year ago, has announced it’s made a purchase of its own: Strobe, which specializes in shrinking LIDAR arrays down to a single chip. The most immediate benefit here is cost. In a post on Medium , Cruise CEO Kyle Vogt writes that LIDAR-on-a-chip will drop the price “by 99 percent” versus other LIDAR systems. “Strobe, Cruise and GM engineers will work side by side along with our optics and fabrication experts at HRL (formerly Hughes Research Labs), the GM skunkworks-like division that invented the world’s first laser, ” Vogt wrote. The new LIDAR system can apparently deal with sun reflecting off rainy streets and help differentiate between someone clad in black jaywalking at night. Vogt wrote that when combined with RADAR and cameras, the LIDAR can handle pretty much every type of sensing needed for self-driving applications. If you were looking for proof that GM might beat the competition to market, well, this could be part of it. Via: TechCrunch Source: Medium