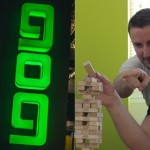 GOG.com’s Guillaume Rambourg giving Jenga advice. Digital games distribution site GOG (Good Old Games) has spent the last five years offering classic videogame titles DRM-free to its customers. Earlier in 2013, the site launched an indie publishing platform which allowed independent developers to submit their games for sale through GOG—an alternative to Steam’s contentious Greenlight initiative . Wired.co.uk spoke to Guillaume Rambourg, managing director of GOG.com, to discuss DRM, anti-sales, and why exactly the site was offering the original Fallout games free of charge. Wired.co.uk: What was the story behind setting up the GOG.com website? Rambourg: It all began in the mid-90s, when friends Marcin Iwinski and Michal Kicinski started their business as retail distributors in Poland. Back then, Poland was a very highly pirated market, with most gamers using outdated hardware and not having too much money to spend on games. That’s a tough market to break into: one where people aren’t used to paying for games. Read 32 remaining paragraphs | Comments

Read the original:
GOG’s managing director: Gamer resistance to DRM is stronger than ever