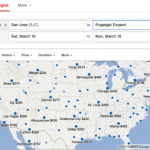 It’s no secret that Google has an interest in the automotive industry , but over the years the popular search engine has also managed to amass quite the collection of aircraft. So much in fact, the company is in the process of inking an $82 million construction deal that would bring its fleet to Mineta San Jose International Airport. Pending city council approval, the privately funded facility would generate an annual $2.6 million rent lease, around $400,000 in fuel revenues and create 236 jobs. If agreed upon, the 29-acre Googleport will take up to two years to build and will include an executive terminal along with hangers to house the company’s private Boeing 737 and 747 jets. Google currently parks its jets at Moffett Federal Airfield, where the company has offered to renovate NASA Ames’ Hanger One in exchange for two-thirds of its facility space to house its planes. There’s no word if either deal will affect the other, but as it stands San Jose’s city council is expected to vote on its proposal sometime in April. Filed under: Misc , Google Comments Via: Gizmodo Source: Mercury News