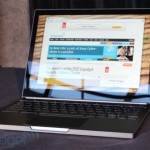 Only yesterday we were being teased with the idea of a touchscreen Chromebook . Well, good news for people who hate waiting — it’s here, it’s called the Pixel, and you can pre-order today. The all-Google laptop is aimed at those who live in the cloud, but want a little more from their machine. Built from the ground up for the web, the 12.85-inch 3:2 ratio display claims to offer 18 percent more vertical space than 16:9 does. The screen the Pixel has is — as you can imagine — one of its proudest features, sporting a 2,560 x 1,700 resolution, giving a PPI of 239, and offers a brightness of 400nit. Oh, and of course, it’s touch-enabled so whatever your input preference, you’re covered. On the inside, there’s a dual-core 1.8Ghz Core i5 processor, 4GB of RAM and two SSD options — 32GB or 64GB. If that’s not enough, Google’s ahead of you, and is throwing in 1TB of Drive storage with every Pixel for three years — what it expects the life of the machine to be. You won’t be basing your choice just on storage though, as the smaller capacity model is WiFi only, while the 64GB comes with Verizon LTE baked right in, and a choice of plans. As for the rest of the features, the Pixel also has a triple-microphone configuration — with one under the keyboard — which helps improve noise cancellation, including the rattle of your typing during excited hangouts. This is also where the speakers are hidden, so it will be interesting to see how those play nice together. Other features include an “HD” camera, a custom keyboard action for less finger-fatigue, and an enhanced smooth glass trackpad. As for ins and outs, there are two USB ports, a mini displayport, a mic / headphone jack and an SD card reader — notably, no Ethernet. Wirelessly, you have WiFi a thru n and Bluetooth (plus that LTE if you opt in). Wondering what effect that display might have on the (59Wh) battery? Well Google claims its open-source test (available for criticism online) has rated the Pixel at five hours. If you want to get yourself some touchscreen Pixel action, you can order starting today from the Play store, or Best Buy starting tomorrow. The WiFi-only model will cost you $1,299, rising to $1,449 if you want some LTE (currently US / Verizon only). Not enough info for you right there? Why not head over to our minty-fresh hands-on . Filed under: Laptops , Google Comments 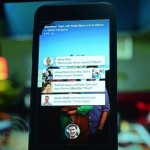