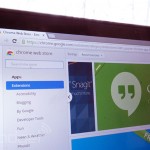 A while back Google said that it would stop letting Windows users install Chrome extensions that didn’t come directly from the Web Store. The company ended up delaying the plan, but there is no more fighting it . Today users of the stable channel of Chrome on Windows will no longer be able to install extensions from outside the Web Store. That won’t impact too many users thankfully, but it could make it difficult for those that like to run experimental add-ons. If you’ve already sideloaded extensions from outside of the Chrome Web Store, those will be disabled starting today; if you want to re-enable them, you’ll have to make the switch to the dev channel of the browser. The idea is to protect users from malicious extensions that haven’t made it through Google’s screening process. Of course, OS X and Linux users can continue to use all the unapproved extensions they want. Apparently only Windows users need to be protected (perhaps from themselves). Filed under: Internet , Software , Google Comments Source: Google

More:
Google cuts off Chrome extensions that don’t come from the Web Store