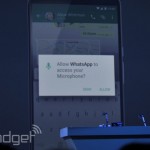 Like clockwork, Google lifted the veil on Android M at its I/O developer conference today, an event that’s traditionally served as the company’s launchpad for its mobile OS updates. No, we don’t yet know what the “M” stands for (we’d love to see Android Marzipan), but as usual that’s not stopping Google from divulging details. After the bold redesign that was Android Lollipop , M is more focused on refining the entire Android experience. “For [Android] M we’ve gone back to the basics, ” said Google SVP Sundar Pichai. “We’ve really focused on polish and quality, we’ve literally solved thousands of bugs.” Those improvements start with more granular app permissions. Android M breaks down permissions into categories like location, camera and contacts. And rather than dealing with permissions before you install an app, you’ll be prompted as the apps require specific features (yes, a lot like iOS). David Burke, VP of engineering at Google, showed off the new permissions on stage by having WhatsApp request microphone access. The new permissions should make it a lot clearer what exactly apps are doing on your phone — they’re certainly a lot more informative than the dump of security information we’ve seen on Android up until now. Android M will also let developers improve the web experience inside of their apps by using Chrome Custom Tabs. Pinterest, for example, now pops up speedy little web windows whenever you tap on a link. Basically, developers will be able to make their in-app web experiences feel just like the apps themselves. Google’s also making deep linking between apps a core feature of Android M, which allows apps to point to specific screens in other apps. (Think of it like being linked to a specific web page, rather than just a home page.) Developing… Don’t miss out on all the latest news and updates from Google I/O 2015. Follow along at our events page . Filed under: Mobile , Google Comments

Read the original:
Google debuts Android M, which is all about ‘polish and quality’

Smart card Plastc goes under despite $9 million in preorders