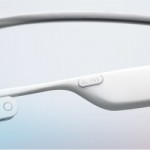 Google The Google Glass team yesterday released a list of tech specs for the upcoming augmented reality glasses. They will have Wi-Fi and Bluetooth connectivity; 16GB of flash memory, with 12GB usable (synced with Google cloud storage); a 5MP camera for photos and 720p for video; a battery providing a full day of typical usage; and an HD display that will be “the equivalent of a 25 inch high definition screen from eight feet away.” The optimal resolution for photos and video will be 640×360, according to a separate document prepared for developers. Developers using the Google Mirror API to create applications for Glass have also been told not to serve up any advertisements. “You may not serve or include any advertisements in your API Client,” the Mirror API terms of service state. “You may not use user data from your API Client for advertising purposes. You may not sell or transmit any user data received from your API Client(s) to a third-party ad network or service, data broker, or other advertising or marketing provider. For the avoidance of doubt, user data from the API Client(s) may not be used for Third-Party Ad Serving.” Read 5 remaining paragraphs | Comments