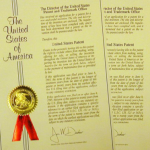 Vringo is a little company that’s made a huge bet on suing Google over patents. Today that bet paid off, although to a much lesser degree than its investors hoped earlier. After a two-week trial in Virginia, a jury found that Google’s advertising system infringes two old Lycos patents purchased by Vringo in 2011, and that those patents are valid. Google and several of its advertising partners were ordered to pay a total of about $30 million. That’s a lot of money, but far less than the $493 million Vringo was seeking. According to a report  just published in the Virginian-Pilot , the jury found that Google will have to pay $15.9 million. Its advertising partners must pay smaller amounts: $7.9 million in damages for AOL, $6.6 million for IAC Search & Media, $98,800 for Target, and $4,000 for Gannett. The jury also said Google should pay an ongoing royalty; but whether that ultimately sticks is up to the judge. The Vringo case is remarkable for two reasons: first, it’s rare to see a high-profile patent attack played out directly in the stock market, with investors speculating on each move in court. Second, demonstratives submitted in Vringo’s case show a fascinating story in pictures of how a company that’s more or less a “patent troll” tries to convince a jury to shower it with money. Some of those visuals are posted below. Read 11 remaining paragraphs | Comments