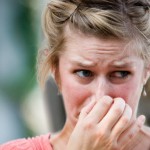 It takes a special patent to pique our interest these days, but Google has just been issued actual intellectual property for a device that would help others evade your stank . The “odor removing device” (below) is designed to “emit a fragrance in response to detected parameters, ” but that’s not the half of it. It would also detect your body temperature, heartrate and other factors to determine if you’re extra rank from working out. Not only will it then dispense perfume to cover it, it’ll even track the location of your friends and find you a route home to avoid them. It could also figure out “fragrance emission schedules” gleaned from your social networks or calendar and how much to spray “based on your sweat history.” Google has cooked up other, similarly bizarre usage cases for the device, but the illlustrations do look legit. Still, though some Google patents do end up as commercial products ( soft of ), we doubt we’ll be smelling this concept later. [Image credit: Getty/Jupiter Images] Filed under: Peripherals , Google Comments Via: Tech Digest Source: USPTO

More:
Google knows you stink and wants to help