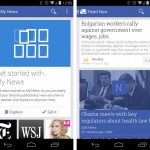 The long-rumored Google Play Newsstand for Android has finally launched , and it’s not at all what we were expecting. Early reporting and investigation pinned it as a newspaper section of the Play Store, but it’s much more than that. Google is selling newspapers and magazines under a single banner, and  there’s a visual-heavy RSS reader, sort of like Flipboard. This means Newsstand is replacing two of Google’s existing apps: Google Play Magazines and Google Currents. Google is pitching it as “all your subscriptions in one place.” Like most things “Google” these days, calling it an “app” isn’t really the whole story. There’s also a new section of the desktop Play Store, and some magazines and newspapers are even viewable in the browser. RSS is strictly confined to the app, though. Just like the old Play Magazines, paid content is available as a subscription or on a per-issue basis, and 30-day trials are available for some premium content. RSS feeds, magazines, and newspaper can be downloaded for offline reading later, and there’s also a bookmark function. Read 1 remaining paragraphs | Comments

Quartz heated at 1,700C looks like something out of Tony Stark’s...