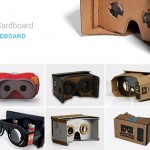 Google wants all apps developed for its Cardboard VR headset to work properly with, well, any version of its device. That’s tougher than it sounds, since the headset’s open-source, and a lot of companies and individual users are tweaking it to their heart’s content. To make it happen, Mountain View has launched the “Works with Google Cardboard” project, which gives headset makers the power to ensure their design plays nicely with apps made for the device. It doesn’t matter if they use metal or plastic, cut the materials out using any dimension or adjust the optic, so long as they input all those details into the Cardboard website to get a QR code to attach to their creation. Once they (or another user) scan that QR code using the headset’s app, all applications designed for Cardboard will be optimized for their viewer. Makers selling their headsets can also apply for a certification badge indicating their design is compatible with apps and games developed for the device. Mountain View has even put together a shop where people can get headsets that have both a “Works with Cardboard” badge and a QR code. Speaking of apps, Google has also launched a new set of design guidelines for developers, which focus mostly on how to make their creations usable. In addition, the company has released updated Cardboard SDKs for Android and Unity with better head tracking and drift correction. Users, on the other hand, can now find compatible apps more easily, thanks to the new Music and Video, Games, and Experiences Cardboard application categories. If you’re yearning for more significant updates than these, though, don’t worry — it looks like the company has big plans for the device. A team from the School of Engineering in Trinity College Dublin has just joined the Cardboard division, bringing their ambisonic surround sound technology with them. Google says it will use that technology to bring “immersive audio to VR” in the future. Filed under: Wearables , Google Comments Source: Google Developers , Get Your Cardboard