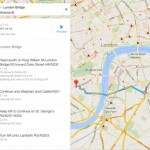 The revamped Google Maps design reached Android last week; now, it’s iOS’ turn. Google Maps 2.0 is gradually rolling out worldwide for Apple’s platform, and it’s bringing the Android version’s discovery and exploration components as well as some new-to-iOS features. Long-anticipated iPad support is the highlight, although there’s also indoor navigation , live traffic updates and incident reports. Maps 2.0 hasn’t hit the US just yet, although it should be available shortly. Update : It looks like it’s hit the US App Store as of midnight ET or so, check the link below to grab the update yourself. If you’re looking for offline maps, those are available with an Easter Egg like the one first featured in the Android version. Just zoom to the area you’d like to cache, then type “Ok maps” in the search box. [Thanks @carloslarez ] Filed under: Cellphones , GPS , Tablets , Mobile , Google Comments Via: 9to5 Mac Source: App Store (US)

How the World’s Most Glamorous Ice Bar Stays Frozen In the...