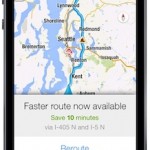 In an effort to bring Maps for iOS up to par with its Android equivalent , Google has released an update that makes the app on Apple’s platform smarter in real-time. Now, when you’re using Navigation mode within the iOS application , Google Maps can send a notification to let you know a faster route has become available. If that’s the case, you’ll simply have to choose from either a “Reroute” or “No thanks” option — but, you know what they say, time is money. It’s worth noting this particular feature made its way to Android last month, and now those with iDevices will be able to take advantage of it as well. Unless, of course, you’re just a big fan of Cupertino’s own map service . Filed under: Software , Mobile , Google Comments Source: App Store , Google Maps (Google+)

Continued here:
Google Maps on iOS now notifies you when a faster route is available