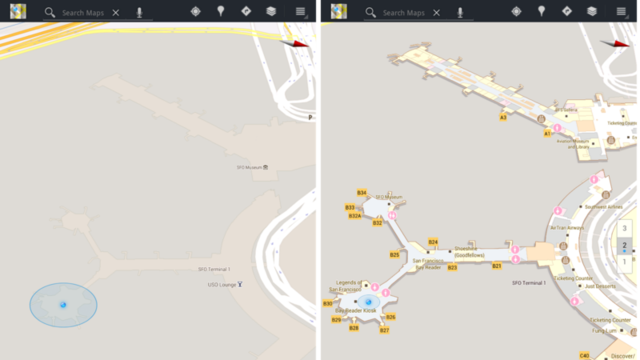 Google has begun mapping indoor establishments like malls, airports, and retail stores, and today added the first indoor maps to its application for Android. Now, air travelers don’t have to bother with information booths and freestanding maps: Google Maps can show the way to their gate or the nearest coffee shop or bathroom. Turn-by-turn directions aren’t provided, but the maps will show users where they are in relation to nearby landmarks.

Instead of creating X-ray imaging satellites for the task, Google is partnering with the organizations that manage the facilities to get their floor plans into its Maps service. Airports in Atlanta, Chicago, San Francisco, and Tokyo are among the first to receive the indoor mapping treatment, joined by the Mall of America in Minnesota, certain locations of IKEA, Home Depot, Macy’s, Bloomingdale’s, and others. While Google worked with these businesses to ensure a certain level of precision, the search company also set up a do-it-yourself site for other business owners to upload floor plans, blueprints, and directories and line them up with satellite images.

“Detailed floor plans automatically appear when you’re viewing the map and zoomed in on a building where indoor map data is available,” Google said in an announcement today. “The familiar ‘blue dot’ icon indicates your location within several meters, and when you move up or down a level in a building with multiple floors, the interface will automatically update to display which floor you’re on.” But business owners that want to join in on the fun may have to wait a while. Google notes that “Google Maps Floor Plans is still in Beta. We’re still working out the kinks in how we process your floor plans, so right now we can’t give estimates on when your floor plans will appear in Google Maps for Android.”

Indoor Maps was added to version 6.0 of the Google Maps application for Android, and will presumably be added to additional mobile platforms in the future. We asked Google if Indoor Maps will work on desktop Web browsers, but were told that “the new indoor maps feature of Google Maps is only available on Android mobile devices at this time.” Microsoft, by the way, already has indoor mapping of major malls for Windows Phone and indoor mapping of airports and malls for the desktop.